Share All sharing options for: Irish land 2010 commit #4- Are you nervous? 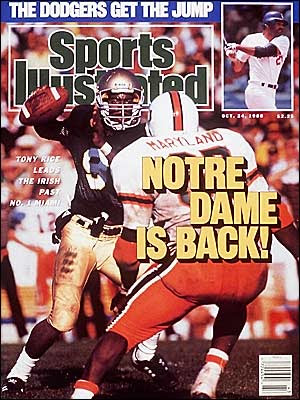 On a daily basis I talk with college football fans representing the gamut of college football teams. Some are people I know professionally, some are personal friends and a few are OFD readers that occasionally send me e-mails and leave comments. I enjoy those discussions quite a bit. In the last couple of days those discussions have surrounded the fourth verbal commitment to the current Notre Dame recruiting class, Cincinnati Tight End Alex Welch. Interestingly enough the question I have been asked most often was not what I think about Welch, or the fact that ND is turning into "Tight End U." The question I have now fielded several times in the last couple of days is whether or not I’m nervous about the pace at which the Irish are landing commitments this year? My answer is no, not yet. Here is the logic.

The truth of the matter is that the worst residual side effect of the late 2008 Irish slide was the uncertainty is cast around the program in general. The media at large of course fanned the flame and I have yet to see any preseason coverage of 2009 that didn’t mention it. It is what it is and unfortunately it comes with the territory at ND. In my opinion Miami is another traditional power on a very similar track yet you don’t hear much about any uncertainty surrounding the Canes. Was their 7-6 campaign in 2008 really that different? If you take an objective look at the results I think the answer is no. Both programs are poised to take a big step forward in 2009 and could potentially be back in the hunt in 2010.

In regards to Notre Dame specifically one of two things will happen in 2009. If the team performs well on the field the uncertainty will rapidly dissipate and the verbal commitments will fall in right on cue. If the team continues to struggle on the field we’ll probably be talking a lot more about who the next coach might be vice the next verbal commitment. We should have a pretty good idea which way it is going to go by the end of September, and will definitely know by sundown on October 17th. Based on the way things are shaping up I expect to see a much improved performance on the field in 2009 followed by a positive snowball effect in recruiting and all other aspects surrounding the program. So no I’m not nervous. Yet……..