The week in news- Networks, Crazy Money and Weis Lumps

Share All sharing options for: The week in news- Networks, Crazy Money and Weis Lumps 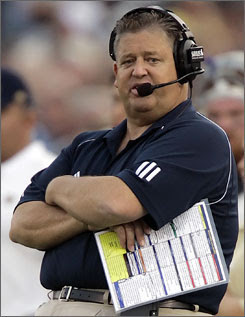 Congrats to the Big 11, you have officially started a trend. Due to the financial success of the Big Ten Network other BCS conferences like the Big XII and Pac-10 are looking to follow suit and start networks of their own. Hopefully this will work out perfectly for college football fans and we will all have to get DIRECTV, DISH Network and three different cable providers to get all of them.

I have commented on the future of Miami transfer Quarterback Robert Marve a couple of times in the last few weeks. In short Marve appeared to be headed to Purdue, got temporarily side tracked by Boy Kiffin and now looks to be back on the Boilermaker Special. Congrats to Purdue, this is probably the most positive thing that has happened for them since Wilford Brimley retired. Congrats to Marve as well for successfully resisting the charms of Kiffin and going with the school that could actually put him on scholarship. The down side is that he’s good enough to potentially be annoyingly effective if Danny Hope and company turn him loose to throw and run. Brian Smith and the boys will need to be in his grill ASAP in 2010.
Speaking of Kiffin I have to give the guy credit. He is hands down winning the off season award for "any publicity is good publicity." His latest escapades involve an illegal Tweet and some more apologies for previously ruffled feathers.
Red Stick’s favorite son Leslie Miles might have to take a mandatory week off and forfeit his weekly salary of 62k in the process. I went somewhere horribly wrong in life. I wonder if I can talk someone into paying me 62k a week to go for it on 4th down when it makes absolutely no sense?
Speaking of coaches salaries, I suppose that as they continue to skyrocket so will suits like this one at Kansas State. These things are all like Prenups gone bad.
Joe Montana is now coaching his son Nick at Oaks Christian High in California. I thought I saw some "big time" high school stuff growing up in Texas but Oaks Christian is a whole new level.
Armando Allen drew a very favorable comparison to Reggie Bush this week on bleacher report. If it pans out like this I’ll be ecstatic.
The Irish are working a game at the new Yankee Stadium. I don’t care who it is against that is good stuff!
Notre Dame Head Coach Charlie Weis took some more lumps in the press this week. I won’t even bother linking all of it. If you haven’t seen it and you are interested the great Notre Dame Bloggers linked in my right side bar collectively have the links and some comments of their own. I will say that I find all of it pretty annoying at this point. I’ve got it the last two years sucked. I’ve been following college football and Notre Dame in particular long enough to know it comes with the territory. But all of it just makes me pull even harder for Coach Weis. I really hope Coach Weis and the team are ready to "get some" as they say in the business! That is the only way to shake it! Of course he could have great teams for the next 10 years and someone out there will still be talking about 2007 and 2008. If nothing else I hope Charlie gets some bulletin board mileage out of this one from the top. I’m sure he was just trying to motivate the boys……..