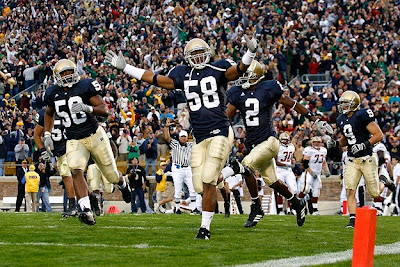 I just watched the final two installments of "Notre Dame Week" on College Football Live. For anyone else out there that's interested below is the break down. The full phone interviews with Brian Smith and Jimmy Clausen that I will mention below can be found at THIS LINK. It is the same page where the interviews from Monday through Wednesday were hung, and as I mentioned in the post on Thursday the WWL cycles through these pretty quick so they may not be up for long. As with the Thursday post please excuse any shorthand.

-Very short 3 minute segment.
-Jonathan Coachman in the studio as the host.
-Rodney Gilmore in the studio as the analyst.
-The ND Segment opens with a brief mention of Weis on Twitter.
-Coachman mentions that there is a lot of pressure in 2009 on the ND Defense.
-Flash 2008 Defensive Stats with a focus on the #39 Ranking in Total Defense from 2008.
-They play some snippets of the phone interview with Brian Smith mentioned above. Interesting quote from Brian "We've got great coaches." "It was just a lack of focus where we couldn't finish out games and do what we needed to do to win." The context being that ND was a young team etc. That said I thought Brian did a really good job with the interview. Good kid.
-Flash more stats- 10 Offensive Starters returning, 100 OL starts, 44 DL starts, and 51 secondary starts. With Schwapp & Grimes gone I'm not sure where they got 10 vice 9 on Offense not that it really matters.
-Coachman asks Gilmore "what they need to do to step up?" Gilmore gives the standard running game answer but expands on it to say he'd like to see more fullback and two TE sets. Having Aldridge repping at FB and actually having more than 1 TE heading into 2009 I'm fairly certain both of these things are highly likely.

-Coachman asks Gilmore "what the result will be?" Gilmore says they "could and should" be 5-0 going into the USC game and that if they can get to 4-1 or 5-0 then maybe they hit 10 wins. He goes on to state that if they get some run support Clausen should be fine. Note the season prediction as it changes slightly 24 hours later.

-Rece Davis in the studio with Rod Gilmore as the analyst. The WWL brought the Varsity out for the Friday show.
-More ND stats from 08'. I guess I should just be happy they weren't still flashing 07' numbers.
-They cut straight to snippets from the Clausen phone interview mentioned above. Jimmy gives pretty standard Weis trained answers. After a season doing pressers he's got all the answers down.
-Rece and Rod relocate to the linoleum football field room.
To put the following into context the previous segment on the show was an ode to the greatness of Tebow, Bradford & McCoy.
-Rece asks if Clausen "can lift a lesser team and make them great?" Gilmore throws down a relatively emphatic "NO." He goes on to say he has "a couple of problems" with Clausen. One he says he's gun shy in the pocket from getting sacked too much as a freshman and sophomore and that he needs to step up in the pocket more. Gilmore goes on to say his footwork is also sloppy. Interestingly enough Jimmy himself had mentioned that he's been working on the pocket presence in his phone interview.
-Rece asks Rod if Clausen has elite physical gifts? Gilmore throws down an even more emphatic "NO" and says Jimmy "Is not Sam Bradford." He goes on to say that Jimmy has "good size" but "not a great arm" and "lacks the foot speed to get outside". He finishes with "you have to work within his limitations but he can stand in the pocket and make something happen." He just said he's gun shy in the pocket like 60 seconds before this. Not to mention that on Tuesday on this same show John Saunders said "There is a lot of speculation that this will be Jimmy Clausen’s last year at ND." Whatever. That's what I get for watching it.

-The show wraps up with a game by game season prediction from Gilmore.
Nevada (WIN) A little scare but ND outscores them.
at Michigan (WIN) ND Defense dominates against a struggling Michigan Offense.
Michigan St (LOSS) Should win but lose due to the "S" on the helmet they struggle with.
Purdue (WIN) ND comes to life.
Washington (WIN) ND wins big.
USC (LOSS) USC defense will be better than people think. The streak continues.
BC (WIN) ND bounces back.
Wash St (WIN) ND wins 50-0.
Navy (WIN) ND has a little trouble early then cruises behind Clausen.
at Pitt (WIN) Pitt will struggle on O without "Shady" and ND will look good heading into the stretch. Davis comments on looking forward to the annual Lou Holtz vs. Mark May bowl.
UCONN (WIN) ND has an easy time because UCONN can't throw. Not sure if that's a dig on Zach Frazier and company or a compliment to the ND secondary.
at Stanford (LOSS) "The luck runs out in a surprise loss."

Overall Gilmore prediction 9-3.
Davis comments "I think you are overly optimistic" and predicts that ND "spits up" another one they should win and finish 8-4.

With that "Notre Dame Week" on College Football Live comes to a dramatic conclusion. I really did debate about whether or not to watch it. It is May though, and as we get ready to gear up for the summer of full blown speculation and predictions my curiousity got the best of me. It is easy to sit here and poke holes in the inconsistencies that came up over five days of broadcasts but in reality you could probably do that to anyone, me incl
uded, if you really looked closely enough. You know you are always going to get some obligatory ND digs in there at some point but to a degree that comes with the territory. I tend to throw my fair share of sarcastic comments around too. The best thing about taking it all in this week was that it made me really think some more about how I think this season is really going to go.

The truth is that Gilmore's final game by game "prediction" is the safe bet. I would throw money down in Vegas on 9 wins today. And they had better or else I am going to need a cash advance to pay it off. USC is really the only game on the schedule that is not a W on paper. I think it has the potential to be a very competitive football game but going into the season most will write that one off as a loss with good reason to back it up. That leaves 11 games that the Irish "should" win. I have stated that case at least 10 different ways in 10 different posts at this point so I won't go back into my laundry list of rationale. But the real difference between a "good" season and a "great" season is winning those 2 or 3 or 4 games where that team you should beat shows up and takes you to the 4th quarter. In 05' and 06' Brady Quinn and company found ways to win most of those games. 05' Stanford and 06' UCLA are the most prominent examples that come to mind. Although this team is all "grown up" now and should win those games they have yet to prove they actually will. Most importantly to themselves. So 3-4 losses from the talking heads at the WWL are safe predictions, and in their line of work probably the right ones.

As fans we can blame the coaches and a host of other things for 2008 North Carolina, Pitt, and Syracuse, but at the end of the day those games were lost because the 11 guys in the huddle didn't believe they could get it done. That may be over simplifying it but what I'm getting at is that the mental aspect of the game was lacking. Call it confidence, belief, killer instinct, the will to win or whatever else you want to but the 2008 version of the Irish were short on it. This team will likely find themselves in a similar situation in one of the early 2009 games. ND always gets everyone else's best shot. If and when the team can turn that corner mentally and find a way to win when the chips are down everything changes from that point forward. Once they do it, they will start to believe and that belief will snowball. The mental aspect of football, or most anything else for that matter, is huge. This team has the talent, depth and dare I say coaching to have a very special season in 2009. But that mental hump is the one that will make or break the season and ultimately be the determining factor in whether this team is good or great.